I did the Texas 200 again this year.  Check out the new video.  Thanks for reading and watching.
New Texas 200 Video.
Posted by john bratton at 4:54 AM 9 comments:

A little Maintenance and Reloading

It 's time again for the Texas 200.  It's one week away.  A little maintenance and a couple of modifications are in order.  This year I have some extra special equipment and a lot more knowledge about movie making.  The doc will be bigger and better! Time to reload and do it again.

As far as modifications go, both of them involve the steering.  The design of the tiller always seemed a little odd to me.  It has no lock on being pulled out of the tiller.  It is really not a big deal under normal sailing but it could be pulled out in situations when things get awkward. To remedy the problem I made a pin out of cocobolo (because it was on the shelf) and drilled a hole where it could be inserted as a stop.

The other steering modification was to the pintles.  Pintles are the pin part of the hinge on the rudder. The pintle is inserted into the dungeons.  Anyway, as these pins had broken in they had become a bit looser.  Nothing but gravity and friction keeps these pins down.  During last year's 200 there was some wave action that would push the rudder up and occasionally I would have to pound on the top of the rudder to get it back seated all the way down.  After a couple of days my hand was getting sore.  To fix the problem I drilled a hole in the pintle and put a ring through the hole with a washer on top for good measure.

Other items to tend to were general wooden boat things.  In other words, refinishing and cleaning.  I didn't take any before pictures because it was embarrassingly nasty and should have never gotten that bad.  Good news is things really cleaned up nice.  The rub rails did need refinishing and they came out looking nice.

When I get back, the boat is going into the shop (with the AC) for a complete overhaul and get her back to new condition.  Working outside is a drag. She is too good of a boat to be neglected. 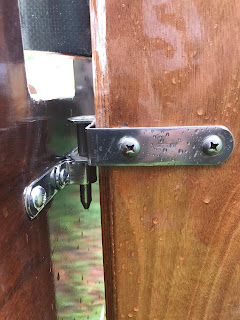 Pintles and dungeons.  Sounds like a game the nerdy kids play. There is now a hole through the exposed area of the pin with a ring through it. 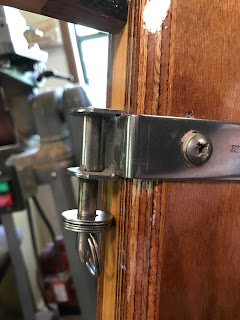 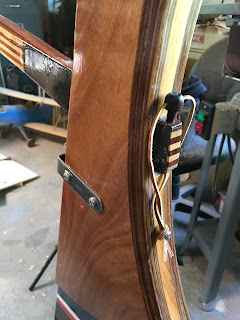 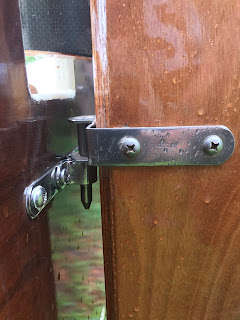 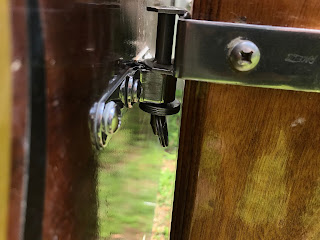 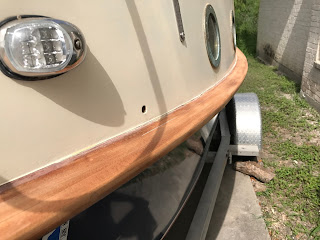 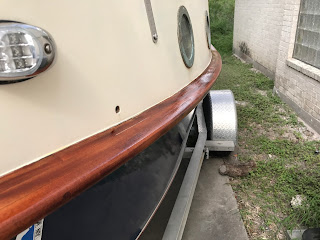 Check out the Doc I just finished about the Texas 200.

The name of the documentary is "Two Hundred Miles in a 15 Foot boat". Just put that in the youtube search engine if the link does not work. Thanks for viewing!

Another project.   Ok I'll admit I am delaying having to work on the trailer...I can't stand working on trailers, but this one is important.

I have found that anytime a passenger goes for a ride he or she always wants to sit or stand in the companionway.  They usually end up standing because sitting on the threshold of the companionway is not comfortable for very long (like about 30 seconds).  Many of the pocketship builders have built seats that ease the pain of the plywood edge.

I wanted to make something small and easy to store, strong yet lightweight.  After a bit of head scratching I came up with some that seems like it is going to work.  I will be taking a passenger in the upcoming Texas 200 and it will get a good field test before I spend a lot of time on the paint and finish. Originally I had planed to put a couple of drink holders in the top, and still might do it, but I am up to six drink holders all ready.  You would think this is a Dodge Caravan. 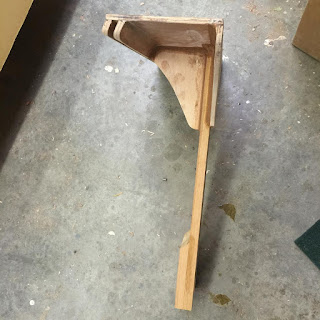 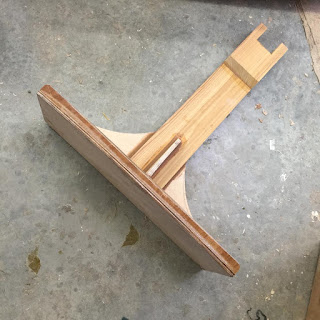 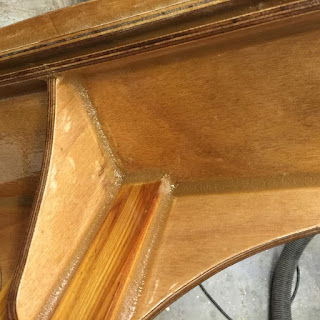 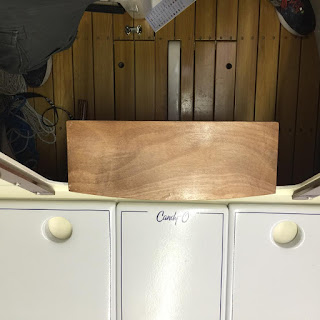 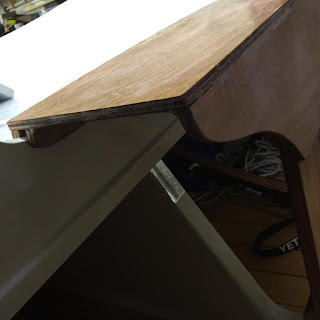 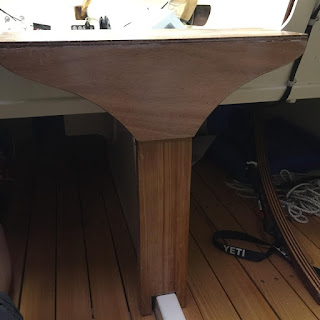 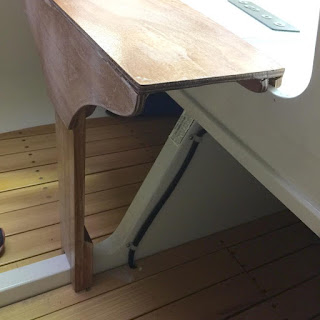 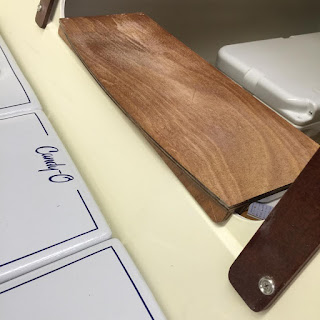 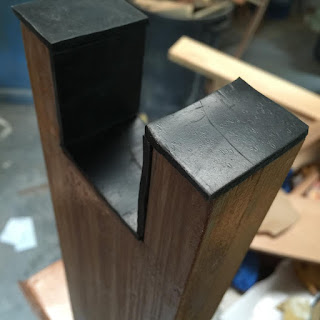 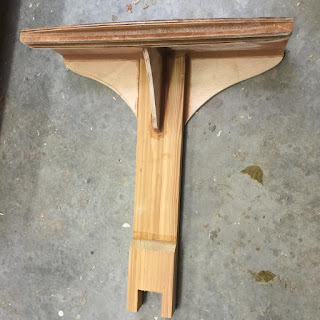 Posted by john bratton at 1:12 PM No comments:

If Blogging was not Enough...

I have a pretty good background in photography that goes back to the days of film.  I know its hard to tell from these blog pictures that are all taken with my cell phone, but I really do. I promise.

With this background I have decided to get into video.  I figure the only thing really interesting enough to video and download to youtube would be something to do with my Pocketship.  There are really fun to watch videos on Youtube with beautiful young couples on 30 to forty foot yachts.  The obvious video project for me would  be documenting the Texas 200.  Kind of a grimy version of the same thing without the hot chicks.

I figured that I really need practice shooting video and learning the editing program.  I have noticed on the videos of Pocketships on youtube have not shown any interior shots.  With the boat in the shop I figured that was a good place to start.  I shot some footage (do they still call it that?) and put together a little three minute video of a tour of Candy-O.

I'll keep shooting and editing some little projects until the Texas 200 starts in 65 days.  I figure that will be enough time to become the Ken Burns of sailing videos.

Posted by john bratton at 4:57 PM No comments:

Just before I started Candy-O I had jury duty.  I got in and out fairly quickly for Nueces County.  Then the Feds called me in for their version of jury duty.  That time I got picked and served on a jury for about a week.  I had a short mention of it interrupting my boat building progress in an earlier blog entry. I was called in again by the county but got out of it because I just served on the federal jury. About six weeks ago I got called in by the county again.  Yep, picked again and served 2 weeks on a jury for an attempted murder of two policemen plus a stolen vehicle and drug charge.  It was pretty high profile.  Lots of news media.  Well just as I get progress going on the boat getting ready for the Texas 200 again this year the municipal court sends me a jury summons.  I really hate to complain because I truly feel obligated and feel good about doing my civic duties, but come on!

For those of you scoring at home, that's five in the last year.

I get called in usually an average of once or twice a year and don't get picked.  I had a Cal Ripken like streak of not getting picked.  The streak went on for years and years.  Then there were the last two times...I am pretty sure I can get out of this latest one pretty quickly after serving so recently.  I go in Monday.

For the past few weeks I have been finishing Candy-O.  That's right,  finishing.  Last year at this time I was determined to make it to the Texas 200, a 200 mile cruise up the Texas coast starting at almost Mexico going up the Texas coast 200 miles.  At the halfway point in where I live (Corpus Christi).  I accomplished my goal of having Candy-O ready for the 200 and had her in the water one week before the Texas 200 start.  Mission accomplished!

After a bit of a rough start things really smoothed out and I was off and sailing.  The copious amount of new things I learn was like drinking from a fire hydrant.  I really only had the sailing skills of a 12 year old, because the last time I had sailed solo on a sailboat I was 12.  On the upside, I did a lot of sailing when I was 12! The sailing came back to me like riding a bike.

In the mornings of the Texas 200, the winds were light.  The distances of  the legs were long and the combination of the two made for very long days.   Seat cushions could have gone a long way in making the second day much more enjoyable. There were other things like a tiller extension that also would have added comfort.  I found sleeping in the boat was nice with the memory foam mattress topper I picked up at Walmart just before the start.  The problem I had was in the middle of the night the mosquito netting I had taped up in the companion way feel down.  I had a few hungry visitors with me before the nigh was over.  I am building some screens into a spare set of drop boards,  I also purchased a DC powered fan.

An outboard motor would have been nice.  The outboard would not only aid in getting into and out of some of the tight harbors but would aid in safety if something in the rigging broke or I got caught in a bad current with unfavorable winds thing could figuratively go south in a hurry.

I did a really good job on a lot of things for the Texas 200.  It is amazing what you can learn from the internet in preparation for such an event.  I had pretty much everything I needed, and went overboard (pun intended) on a bunch of stuff I didn't need.  I am still finding things I packed and didn't need, or forgot I had.  This year I can be more methodical with my cargo.

After the Texas 200 I took out Candy-O in some fairly stiff winds and found some spots on the boat that need attention.  The sail track on the mast is screwed on with screws every 3 or four inches.  I used 1/2" screw into the soft sitka spruce mast material.  The screws began to pull out...not good.  Also the guy wires seemed loose.  The turn buckles I was using were bottomed out and could not be tightened any more.  Gotta fix that!  It was a good thing I bailed out at the halfway point before I would have found these problems in the middle of nowhere.

It has been nice having Candy-O back in the Pocketship Yard.  I really enjoy working on her and dreaming of not just making it to the Texas 200 but finishing the 200 in comfort.

Posted by john bratton at 7:59 PM No comments: